The analysis that follows is part of a series of case studies mixing architecture and disasters.
It is a synthesis of various research elements gleaned and presented in summary form.

L’Aquila is a university town of about 72,000 inhabitants, capital of the Abruzzo region (Italy). This medieval city has a very important historical and artistic heritage, making it one of the 20 Italian cities of art and heritage. The city has always experienced sustained seismic activity (in 1703, an earthquake razed the city to the ground). The city centre is very attractive thanks to its symbolism linked to the quality of the architectural heritage and public spaces; but also functional thanks to the concentration of administrative, cultural, commercial and residential functions (higher rents). The population tends to decentralise to the periphery (cheaper rents).

The earthquake (magnitude 6.3 on the Richter scale) of 6 April 2009 (3.32 a.m.) devastated the city of L’Aquila, killing 308 people and destroying the old town and its monuments.

Thanks to the shock of the disaster and government propaganda insisting on the need to “protect” themselves (but from what?), the inhabitants agreed to abandon their homes and the city.

Citizens, the mayor and the city council were excluded from the reconstruction decisions. When they arrived in the camps, the Civil Protection in charge of their good behaviour ordered the suspension of the most basic rights (drinking coffee, coca, alcohol, freedom of movement without the need to ask for authorisations, right to speak…).

On December 30, 2009, as a reward for its great effectiveness in the response to the earthquake in L’Aquila, S.Berlusconi granted by legislative decree that the Civil Protection will become a private company and will thus continue to guide the reconstruction of L’Aquila. The Civil Defence thus had control over everything closely or remotely related to the reconstruction (expertise, residents’ camps, steering the markets for the new buildings, choice of location).

Added to this, the population later learned that the Civil Protection knew about the earthquake in advance thanks to the strong seismic activity recorded months earlier. The experts were instructed by the Civil Defence to communicate, via the gullible media, that there was no danger. There is talk of the controversy of the “missed alarm”, as the authorities had called for calm before the earthquake, and justice later decided to prosecute those in charge of the “Grandi Rischi” (Great Risks) commission for this reassuring attitude.

However, a researcher, Gianpaolo Giuliani (a former collaborator of the National Institute of Nuclear Physics, who claimed at the time to have developed a method of earthquake prediction based on a hypothetical correlation with the emission of radon by the earth’s crust), stated after the earthquake that he had developed a prediction technique, a prediction for which he could have had to deal with the justice system on 29 March, for having alarmed the population of Sulmona and “triggered scenes of collective psychosis”. The head of the Civil Defence, Guido Bertolaso, denounced the approach of “those fools who entertain themselves by spreading false information”.

Several years later, a phone call is revealed between Francesco Maria De Vito Piscicelli (one of the Civil Defence’s favourite entrepreneurs) and his brother-in-law and partner: Piergiorgio Gagliardi: they laughingly explain that an earthquake of this magnitude “doesn’t happen every day” and that it is a great opportunity to make a profit, so it is necessary to react quickly.

It was not until the end of 2011 with the revelation of telephone conversations that the judiciary investigated the suspicions of corruption and rigged markets. As a result, the privatisation of the Civil Protection was cancelled and in 2012 it underwent a profound legislative reform. 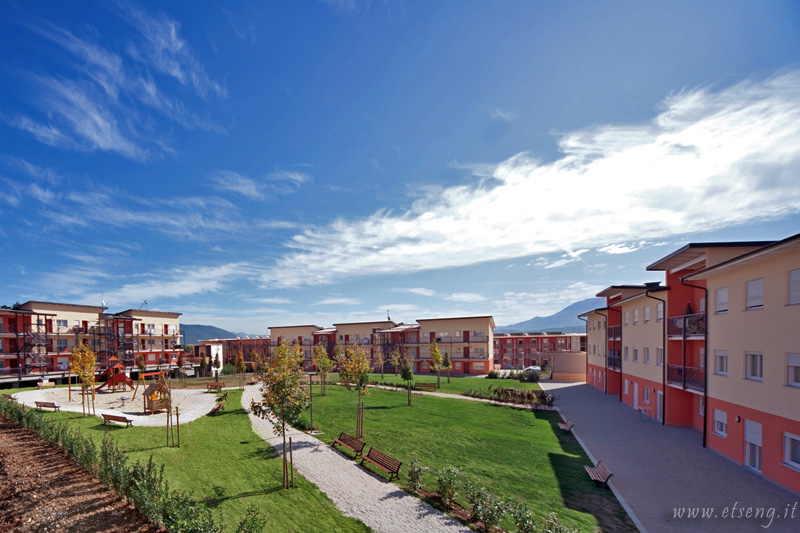 The fact that the Civil Defence has the benefit of a “pass right” has enabled them to bypass the consultation of their decision by the elected representatives of the people (notably the municipality); to award contracts at their own discretion and not to be accountable to anyone (in terms of expenditure of public money).
As a result, the cost of rebuilding housing is estimated at 2800 euros/m² compared to the usual 1000 euros/m².

During his visit to L’Aquila in January 2015, journalist Attilio Bolzoni explained that only 29 of the 900 shops in the red zone were able to reopen. The historic centre has been reduced to dust in the face of the propaganda of the reconstruction carried out by S.Berlusconi and G.Bertolaso. Journalist Angelo Mastrandrea describes L’Aquila “as a kind of equivalent, on an Italian scale, of what happened in Louisiana after Hurricane Katrina in 2005. 7 years later, despite the 3.5 billion invested (according to the mayor of L’Aquila, in an article in Le Monde dated 27 March 2015) the city has still not been rebuilt.

The inhabitants of L’Aquila explain that part of their identity was linked to being able to see the mountains. However, the CASE project was set up several kilometres from the original town centre on an excessive scale, thus upsetting the landscape that the area offered.

Moreover, the project was limited to the creation of housing but no public space.  The result was a grouping of blocks with no space to invest in for its inhabitants, which also avoids too many protests and gatherings in reaction to the decisions of the government and the Civil Protection. Worse, the access to the historic urban fabric of L’Aquila is abandoned and forbidden by the Civil Protection.

Researcher Fulvio Toseroni, (president of the Centre for the Study of Civil Protection Systems – Italian Institute of Resilience, based in Umbria) explains the difference between the management of the 1997 earthquake in Umbria and Marche, relatively comparable in terms of the number of victims, and that of 2009 in Abruzzo:
“In 1997 we went from tent villages to the return to homes through a transitional period of “containers” (prefabricated), small wooden-clad structures designed to re-house the homeless. However, this phase was used to rebuild the original housing. Thus the population was able to return to their homes, thereby rebuilding the social structure (shops, schools, business areas). This did not happen in L’Aquila with the dispersion of financial resources in the CASE project (neighbourhoods rebuilt further away). Now the funds for the actual reconstruction of the centre of L’Aquila are exhausted (…)” according to the interview with Fulvio Toseroni, Spoleto, Umbria. (October 2013)

To go further :
– Arnaud Strina, L’Aquila, the “first internet earthquake” between memory and the media, published on 4 September 2016 on URL: pnrs.ensosp.fr
– Klein Naomi, The shock doctrine. The Rise of Disaster Capitalism, Toronto, Knopf, 2007.